#NEWRELEASE Like A Firework: A Celebration of Love #BoxedSet #Romance 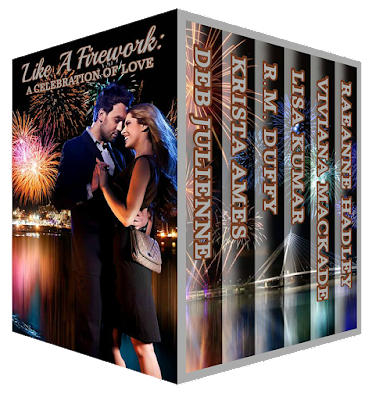 The Fourth of July is an enchanting day filled with excitement, sparks and a little sizzle. Come along as six explosive stories share this Celebration of Love.
Available now:  Amazon  -  99¢ or FREE w/KU

On the day Scarlet Ryan was to marry her long time love, her life changed forever.
That loss left her vulnerable.
In a moment of weakness, she married Vincent Jacoby to give her child a name. Since then her life as spiraled out of control. The only thing she knows is that she has to escape him before he follows through with his threats to take her child and ruin her life.
When an opportunity presents itself, she grabs on and meets the future head on.

Macy Bisbaugh was not about to get married without her best friend, who happened to be her lively golden retriever Maximus. Unfortunately, her fiancé didn’t care about her feelings or her dog, so cancelling the wedding was her only choice.
Logan Sutton was doing his best as a full-time single dad to his energetic six-year-old Aribella. Finding a lost dog along the road made things interesting. When a reward poster appears for the animal sleeping in his daughter’s bed, telling Aribella she can’t keep her new best friend isn’t something Logan knows how to do.
Can Logan and Macy work out visitation without complicating matters of the heart or will this particular match be their one right thing?

In order to get out of the social funk she has been in her entire life, Dr. Lexi Monroe goes and does something completely out of character.  On a whim, she signs up for a trip to Hawaii with a company called WanderLust, in hopes of stepping out of her comfort zone, and finally learning to have fun, even if it means pretending she’s someone else for a while.
Officer A.J. Owens has had his fair share of undercover cases, but this new assignment has him breaking all the rules. Not only is he screwing up left and right, but he’s starting to fall for the sweet, shy woman who turns out to be his number one suspect.
Can he get to the truth before he not only loses the case, but the woman he loves? 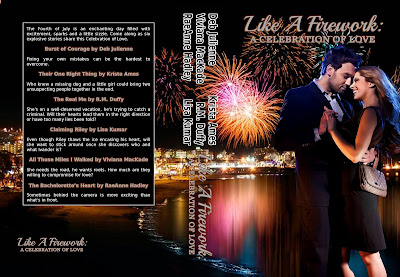 Businessman Ivander Northland doesn’t care for many others than his family and extended clan. But when he meets his fated bondmate, who happens to be the all-too-human Riley Robbins, he scrambles to court her.
Even though she thaws the ice encasing his heart, will she want to stick around once she discovers who and what he is?


All Those Miles I Walked
Viviana MacKade
https://viviana-mackade.blog/

At eighteen, DJ made a choice-her heart or her dreams. Neither was wrong, yet either would break her heart. She chose the world. Over a decade later, she returns to Crescent Creek and to the one regret she’s ever had-Scott.
Scott’s always been steady as a rocky reef. He’d loved once and when she’d left, his strong heart had crumbled like a sandcastle. Now DJ is back, and Scott wants nothing to do with her. If only Eva, his and DJ’s old friend, didn’t need their help. Because of her, he’s stuck with DJ and he’d be damned, she still gets under his skin.
DJ is a free spirit who needs the road under her feet. Scott is a family man who wants to groom his roots. With danger on their doorstep and a baby to keep safe, how much are they willing to compromise for love?


The Bachelorette’s Heart
RaeAnne Hadley
https://raeannehadleyromance.wordpress.com/
She lost her love in a tragic accident. Sheri knows loss, has even become friends with it in a twisted sort of way. She deals with it the best she knows how, forging on with her lonely life. Then one day, her best friend reveals that she has auditioned both of them for a bachelorette reality series! Sheri thinks that is the last thing she wants or needs in her life! And if that isn’t bad enough, both girls are actually accepted to be on the show! Not able to tell her enthusiastic friend no, Sheri reluctantly agrees and both girls are off on their adventure. Very quickly, Sheri realizes she may have fallen-literally-into something much larger than she ever could have imagined. A gorgeous British cameraman, corporate ambition and technical contracts are among a few of her newest roadblocks. She must choose to let go of her past once and for all, if she ever hopes to embrace an even brighter future! 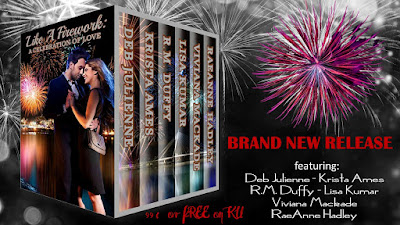