(A Romance Books 4 Us World)
Volume 1 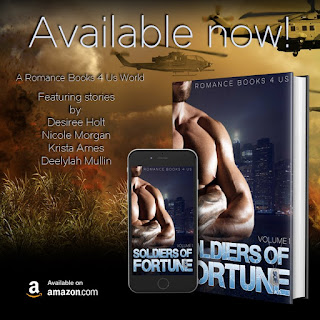 Rhett Fortune settled on the small parcel of land he purchased in 1858 with his wife Clara and founded the beautiful landscape that surrounded his newly built home and what is now known as Fortune, Tx. A veteran of the United States Army and as a Colonel who served with honor in the Mexican-American War, Rhett and Clara raised a large family. Sons and daughters, and grandchildren to follow, their clan grew throughout the decades.

Now in the 21st Century, two of their descendants remain at the helm. Chance Fortune, a former member of the Army's Delta Force and co-founder of Soldiers of Fortune, has an innate duty to serve and protect. Working with his brother, RJ Fortune, a former Navy SEAL and wounded warrior, they take the cases that their government won't. And vow to protect the civilians that no one else can.

They have quietly put out the word and now, after three years, other former brothers-in-arms have contacted them bringing situations that span not only the country but the globe. On Fortune family land they have built a facility out of the public eye for their office, a helicopter, a gun range, and whatever else they might need.

They are the Soldiers of Fortune... and these are their stories.

Do you want to meet these elite warriors?  If so, just follow the link below and one-click your way into hot, rugged, heroes!